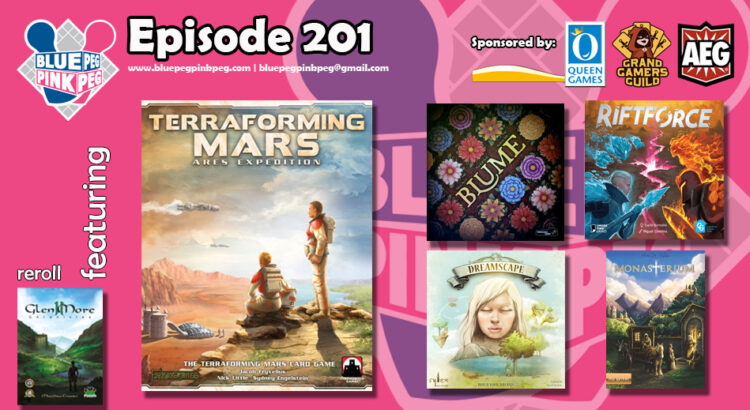 1) The Pegs (plus a special guests) discuss their recent game plays including Monasterium, Dreamscape, Riftforce and many more;

2) All the Pegs review Terraforming Mars: Ares Expedition; and

1:25– Brandon drops some knowledge on one of Robb’s beloved authors Stephen King

7:43 – Robb shares the final winner for the Trivia Contest and announce the date for the hangout in which all the Trivia contest contributors will be able to win some games. August 16th, at 8pm EST.

11:25-Robb announces the winners to the 200th Episode Contest brought to us by our sponsors.

39:35 – Patrick shares what his board game life has been like since leaving the episode

49:15 – Robb shares his birthday weekend extravaganza and how Harper made her debut in a hidden role game; Insider

1:54:19– Horrified-American Monsters from Ravensburger and conversation about cryptids

In Terraforming Mars-Ares Expedition players play cards out of their hands and simultaneously resolve those cards to activate their abilities. This game is played in rounds until all three global parameters are met, the oxygen and temperature level are maxed out and when all ocean tiles have been flipped. Now if you are a seasoned TFM player then the game will come natural to you as there are many similarities, however for those who have never heard of Terraforming Mars this next minute and a half are for you. Each player will have a player board where they will track their Mega credit income, Card allotment, heat, plants ,steel and titanium (similar to TFM steel and titanium reduce the cost of some cards with building and space tags). At the start of the game each player will be dealt two corporations and chose one to keep along with  eight project cards which players will keep in their hand and secret from other players until played. Each player is also given identical decks of phase cards 1-5 (development, construction, action, production and research) . The rounds are broken into three steps. Step one is planning where players will chose a phase card out of their hand and put it face down, once all players have chosen, the cards will be revealed to denote what phases will be triggered, only the chosen phase cards will be resolved and all players will get to resolve the chosen phases regardless of who selected it. Step two is the resolve phase, in which the chosen phase cards are activated. If you are the player that chose that specific phase you will also get to do the bonus ability on the bottom of the card. Development cards allow players to play a green card out of their hand, Construction allows players to play a red or blue card out of their hand, Action allows players to trigger the action abilities on blue cards already in their tableau and also enact any of the standard actions that are listed at the bottom of their player boards, Production allows players to gain production in MC’s, heat, cards, and plants. And Research allows players to draw new project cards out of the deck. Any time a card is played out of a players hand into their tableau they must pay the cost in MC which is denoted at the top right of the card (unless you have special abilities or actions from other cards that reduce that cost) AND also gain the benefit depicted on that card. At any time players may discard cards out of their hand to gain 3 MC’s for each card discarded and use MC gained in this manner to pay to get cards played into your tableau. The final step is the End Step in which every player discards down to 10 cards in their hand, for every card discarded you gain 3 mega credits as normal. Players do not return the phase cards just played back into their hand, they must stay on the table until after the next round, which only makes 4 phase cards available for players to choose from. Rounds continue in this manner until the end game conditions are met in which game play ends IMMEDIATELY regardless if there are additional phases left in the round. Players tally their final scoring which consists of the location of their marker on the TR track, points for forest tokens, and any points acquired from project cards played. Who ever has the most points wins. Let’s head back over to the rest of the gang as we share our thoughts on Terraforming Mars-Ares Expedition.

Check out our original review for Glen More II: Chronicles during Episode 176.

* Disclosure: These titles were received free of charge by the publishers or distributors. If you are interested in submitting a title for review, please read our Review Policy.